History of the Royal Spa

The Royal Spa Nursery School opened in 1977. The beautiful columns that can be seen from the park have an almost 200 year old history

In the early part of the nineteenth century there were spas all over Europe as they were highly fashionable. A problem for Brighton was that it lacked the natural water necessary for a spa. There was a natural spring and spa at St.Ann's Well Crescent Gardens in Hove but this was too far away for the 'fashionable folk' in Brighton.

In 1825 Friederich Struve, a research chemist from Dresden, accidentally poisoned himself with cyanide and undertook an arduous  tour of the health spas of Europe to cure himself. This belief in the curative properties of spa water led him to invent a machine that reproduced the characteristics of natural mineral water using carbonic acid, which he used to blast the mineral rich rocks from the areas of the popular springs in Europe. He believed there was enough trade in Brighton to set up an establishment and in 1825 an 150ft deep well was sunk and Struve opened the pump room of his 'German Spa'.

A choice of waters

The 'Fashionable Chronicle' in the Brighton Gazette provides a description of the building; 'The building consists of a large handsome room fifty or sixty feet in length, and of proportionate breadth and height. A fine flight of steps lead to the noble saloon, on which are placed Ionic columns, supporting a portico in the purest Grecian taste. On the side of the Saloon opposite the entrance runs a counter, behind which are ranged cocks that supply different kinds of waters.' The pump room had a high ceiling with plaster mouldings and chandeliers. The colours were ‘lilac, grey and opal with the plaster decoration picked out in gold’  The floor was polished oak and behind a long mahogany bar were the 15 brass taps which served the various waters, each of which was believed to cure specific illnessesCustomers could obtain the waters of Karlsbad, Kesselbrunnen in Bad Ems, Marienbad, Bad Pyrmont and other continental spas. 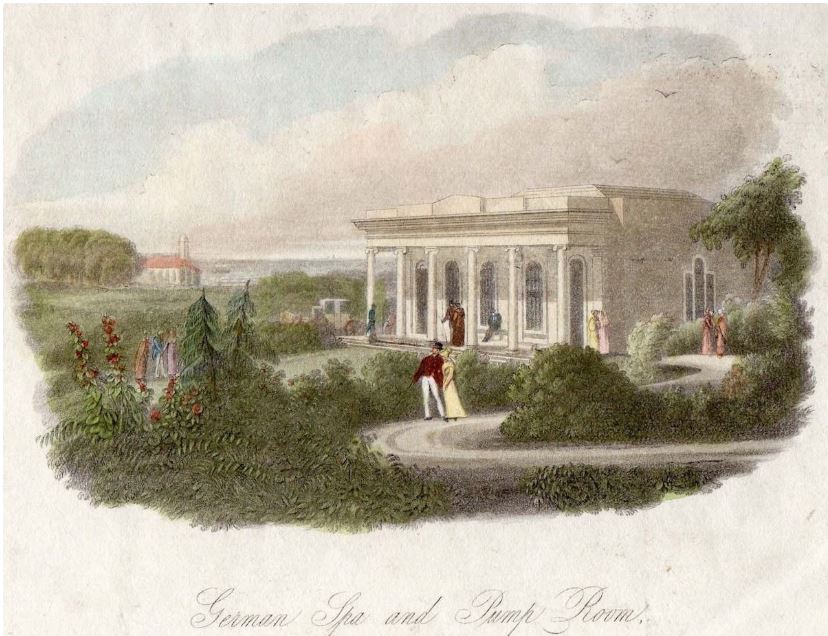 Aquatint from an engraving of the German Spa dated 1827

Queueing for a cure
The curative waters received considerable patronage from the upper classes. In the first season there were 333 subscribers to the spa and in 1835, ten years after opening, Struve obtained the patronage of King William IV. Struve consequently renamed it the 'Royal German Spa'. During the 1830s the spa reached the height of its popularity and had many distinguished visitors.  Struve maintained that most of his cures would have no immediate effect and that it would take about a month before his customers would  be restored to their full heath. The spa was open between May and November from 8 a.m. to 10 p.m. One contemporary writer complained that the pump room was not big enough for the number of people using it and that the number of carriages waiting in the road down to the sea ran into three figures.

The curative waters received considerable patronage from the upper classes. In the first season there were 333 subscribers to the spa and in 1835, ten years after opening, Struve obtained the patronage of King William IV. Struve consequently renamed it the 'Royal German Spa' (at the same time that the park was renamed 'Queen's Park'. 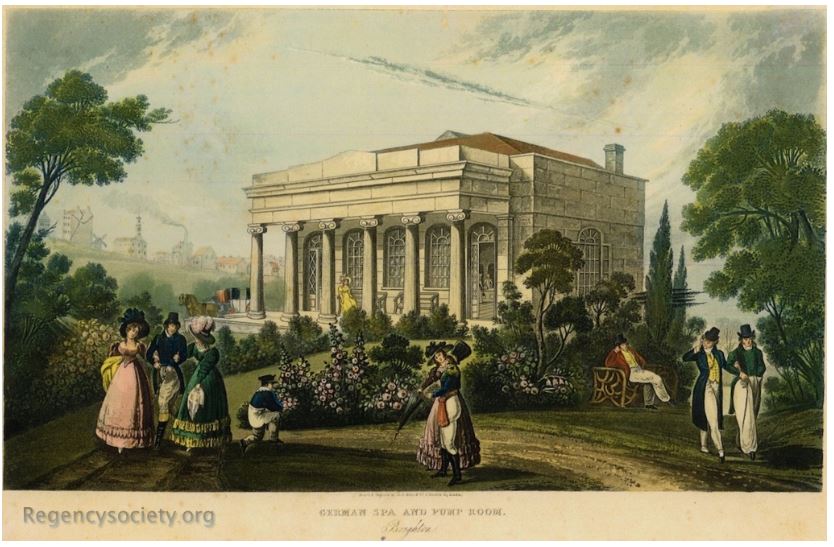 Dr. William King, in his Observations on the Artificial Mineral Waters of Dr. Struve...at Brighton with Cases (1826) called the venture one of the greatest blessings of the century; and Struve himself issued a challenge to anyone to 'cite a single place in Germany where two or three waters of different parts of the world are mixed and drank at the same time'. The patients were supposed to drink the waters prescribed for them by their physicians in the appropriate quantities and sequence, but many drank haphazardly. They included a large number coming to stay in  Brighton for weeks at a time, often 'real or fanciful patients tired of London...and anxious to give the slip to their doctors'.

Prospectus of the Royal German Spa waters. The original is held at The Keep

Strangely the habit of doing this to themselves at a price of several guineas a week fell out of favour and by the 1850s the pump room closed and Struve began to produce bottled water and fizzy drinks.  The company merged with an London chemist ‘Hooper & Co’ in 1891  to become ‘Hooper Struve’. 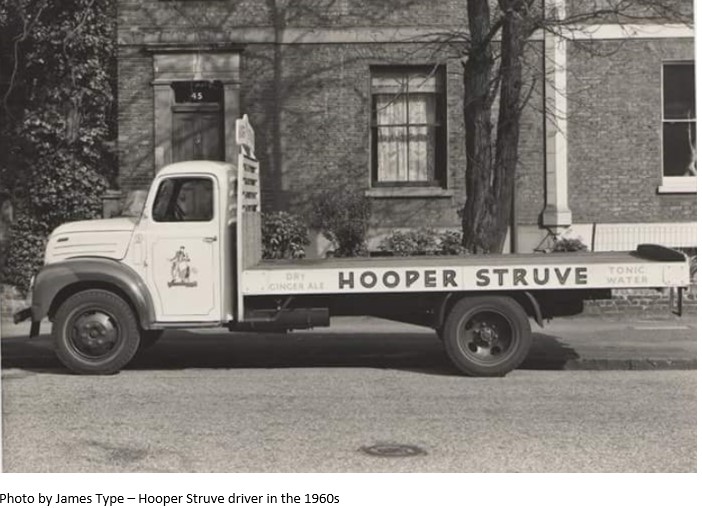 Only in the Second World War did the spa stop production when it became a fire watching station and a gas-mask issuing station. The word 'German' had been dropped from the name dyring the First World War, owing to anti-German sentiment held at the time. We can see on the earliest known photograph of the facade of the building that 'German' was obscured from photographs as well. 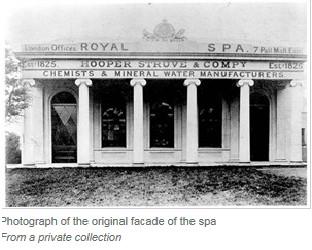 In the early 1960s the well was found to be contaminated with sea water and In 1963 the company moved to larger premises, leaving the spa as a storage shed. The pump room became derelict and vandalized. Hooper Struve was bought by Canada Dry and moved to premises in Bevendean.

Many people in Brighton still remember breaking into to play amongst the rubble and throw old bottles down the well when they were children.

The pump room sat vacant until the early 1970s, when a business man, Oliver Iny, started to make overtures to Brighton Council – he wanted to turn the building into a casino.

True to the radical spirit of the 1970s  local people who felt strongly that the building should be used for the community started a grass roots campaign known as Queen Spark (after the parkland that the Spa sits in – Queen’s Park).  Protests and action were organised, along with a newsletter to document progress. 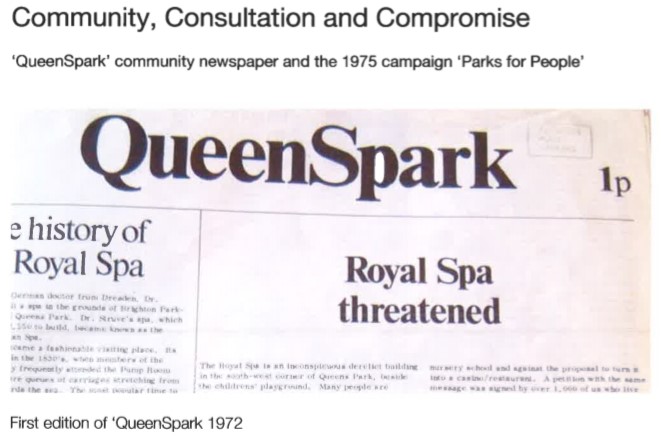 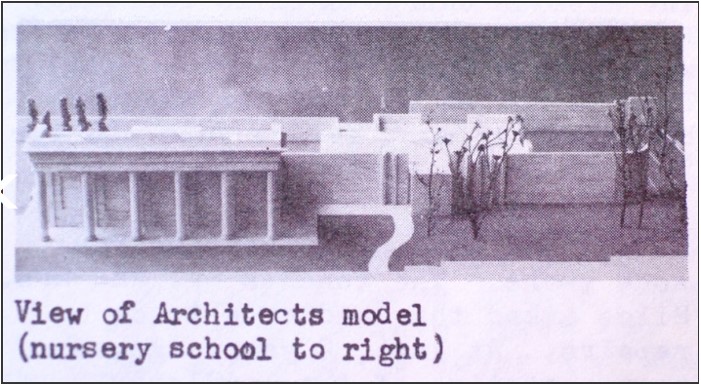 After 5 years of wrangling the building was in such disrepair that only the neoclassical portico of columns remained BUT a nursery school was built into the hillside beside the portico and in 1977 the Royal Spa Nursery School opened its doors.

The Spa sustained an arson attack in 1987, and the school building burned down, but was quickly rebuilt while the pupils attended school in a temporary location.

Today the school has up to 120 children from the community a day and they enjoy the unspoiled, safe acre of parkland, unusual setting and outstanding Early Years teaching.

The local park organisation, Friends of Queen's Park,  also holds its annual carols in the park with the Salvation army on the grounds, theatre companies hire the space for its dramatic backdrop to Shakespeare plays, parties, weddings, memorial services have all  been held in this most beautiful of places. The QueenSpark vision of a space for everyone has come true and continues to serve and delight the community. 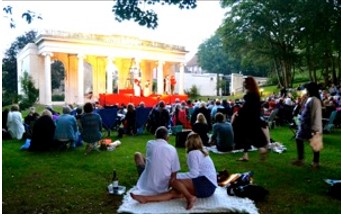 The Story of Queens Park published by Brighton Press.

British Spas from 1815 to the present: A social History by Phyllis May Hembry

History of the Spa  by Andrew Bradstreet on mybrightonandhove.org.uk